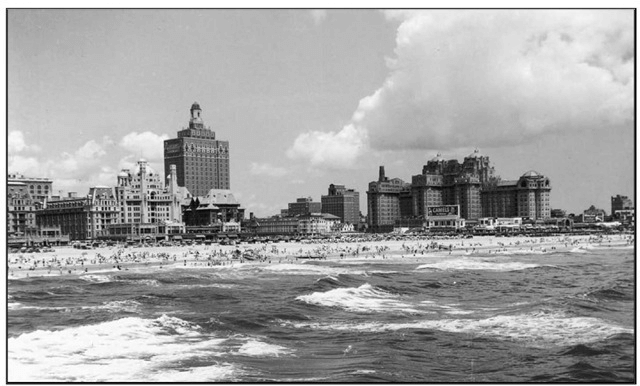 In the early 1900's, Atlantic City was the premiere summer vacation spot for the residents of nearby Philadelphia, New York City and the other burgeoning metropolises of the 20th century United States. Since there was no air conditioning, people would come to the sea side resort to escape the heat.

It was also a major playground for gangsters and mobsters from all over the country, and was even the host of the 1929 Atlantic City Conference, the first major crime summit in the history of the American mafia.

Atlantic City experienced a dramatic rise and fall during the period of Prohibition and beyond, powered by the blatant lack of enforcement of Prohibition in the city. The political bosses that ran Atlantic City understood that the vices were the base of their tourism and they were necessary to maintain the economy and the popularity of Atlantic City.

These political bosses of Atlantic City were unique in that they were corrupt politicians that affiliated with gangsters and widely accepted that vices were tied to the survival of the city. They were not gangsters in the sense of the Mafia. However, while Johnson was not a gangster in the sense he killed anyone or even had them murdered, he did at the very least allow a massive bootlegging operation to occur within the city limits.

Atlantic City did not develop naturally like normal cities along the East Coast. In the mid 19th century the Pennsylvania Railroad Company tried to build a resort city on Absecon Island off the coast of New Jersey. The hope was that the city could be a weekend retreat for nearby residents of Philadelphia and a railway line was connected between Abescon Island and the mainland to help easily transport people from the city.

Atlantic City would have been nothing without the vision and entrepreneurial spirit of Louis Kuehnle, the creator and boss of the local Republican political machine. He was responsible for building utility companies that constructed wells, waterlines and generally built the infrastructure of the city so that it could grow into a major East Coast metropolitan metropolis. 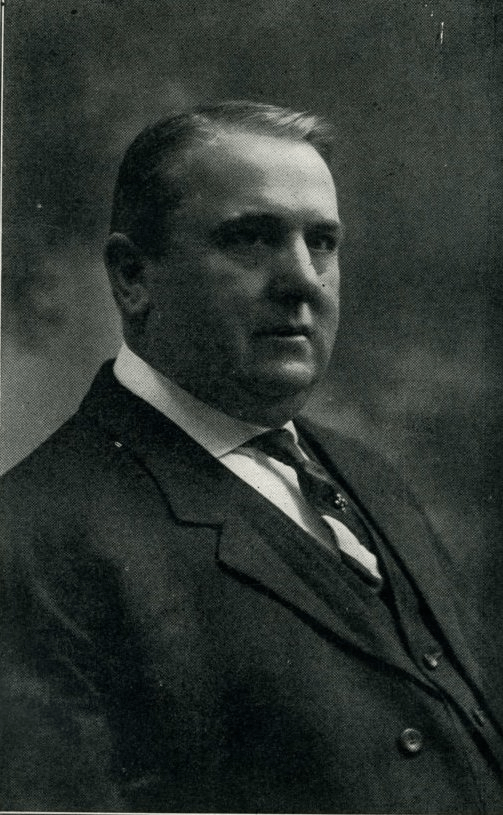 When he was indicted for corruption related charges, the mantle of leadership passed to his chosen successor, Enoch Johnson. Kuehnle tried to return to Atlantic City and reassert his power but his time was over. Johnson gave Kuehnle a spot within the city government as City Commissioner where he sat, respected until his death.

Enoch Johnson was the boss of Atlantic City for over thirty years between 1913 and the early 1940's. Running the city through its height during Prohibition, Thompson was the quintessential boss that Kuehnle was not and often partied and was even responsible in having a leadership role within the National Crime Syndicate. 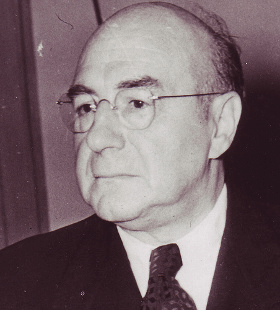 Johnson was responsible for building the Steel Pier and the Convention Center, first of a kind structures in their day and really put Atlantic City on the map during the Roaring 20's, a turbulent and storied period of American history.

When Enoch Johnson was convicted and imprisoned based on tax evasion charges power within the Republican political machine passed onto Frank Farley. Farley would go on to control Atlantic City through its slow decline from the 1940's to the 1970's when the advent of air travel meant that Atlantic City was no longer the premiere vacation spot for people wanted to party and celebrate.

The only physical evidence of Atlantic City's Golden Age is the Convention Center. At the time it was a state of the art auditorium complex and was the site of the 1933 Miss America Beauty Pageant. Held there annual until 2005 when it was switched to Las Vegas, this became one of the most popular pageants in the world.

The Convention Center was also host to many of the American culture events of the time such as the Easter Parade.

More than half a century after its completion by architects Lockwood and Greene, the Hall continues to serve its original use as a convention center. It is also of interest for its size and engineering. In 1929, it was the world's largest convention facility, and its ballroom was larger than New York's famed Radio City Music Hall. It was the largest building in the world without roof posts and pillars.As engineering, the Atlantic City Convention Hall occupies a significant place in the history of large-span structures. Indeed, when it was built, it contained the largest room with an unobstructed view in the history of architecture. That feat was accomplished by the use of an architectural form developed for railroad train sheds, the three-hinged arched truss. The form had already been used for a similar exhibition purpose, in the Hall of Machinery of the Paris Exhibition of 1888, but it had not been used in a public auditorium.The engineering triumph of building so vast a hall on the seashore site resulted, on its 50th anniversary, in its being the recipient of the Civil Engineering Landmark designation of the American Society of Civil Engineers. Atlantic City Convention Hall is also highly regarded by connoisseurs of American pipe organs, for it features what is, arguably, the largest organ in the world, with 33,000 pipes, arranged in chambers built into the walls of the Great Hall. Built in 1933, the organ is still the largest in the world. The organ's first performance was at the 1933 Miss America Pageant.In 1987 the Convention Hall was listed as a National Historic Landmark. 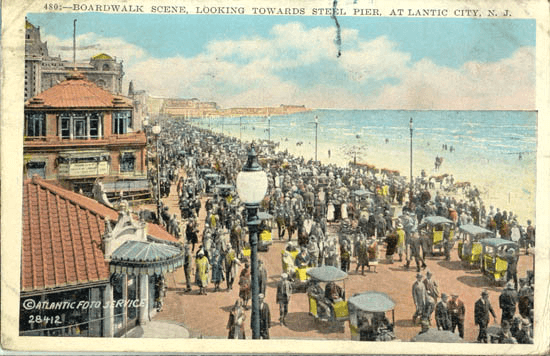 Steel Pier. In its heyday, The Steel Pier entertained tens of thousands of visitors each day with attendance reaching 80,000 the Sunday before Labor Day. With non-stop entertainment including the top names of the day and novelty acts like the Diving Horse and the high-wire motorcycle act and four theaters that could accommodate 12,000 patrons at a time, The Steel Pier was indeed, The Nation's Showplace. It was built in 1898, 16 years after Atlantic City's "Ocean Pier" -- the world's first oceanside amusement pier.The Steel Pier originally opened in 1898 and quickly became known for showcasing the world's top entertainers. From the 1920's through the 50s everyone who was anyone played Steel Pier. W. C. Fields was a member of the minstrel group that appeared during the Pier's inaugural season, but headline appearances quickly followed for him and everyone else. Guy Lombardo, Benny Goodman, Jimmy Dorsey, Mae West, Charlie Chaplin, The Three Stooges, Bob Hope, Amos 'n Andy, Frank Sinatra - everyone played Steel Pier. It's been said that Big Bands weren't really big until they started to play on Steel Pier. For one admission price, patrons could enjoy every concert, film and attraction without ever spending another cent. 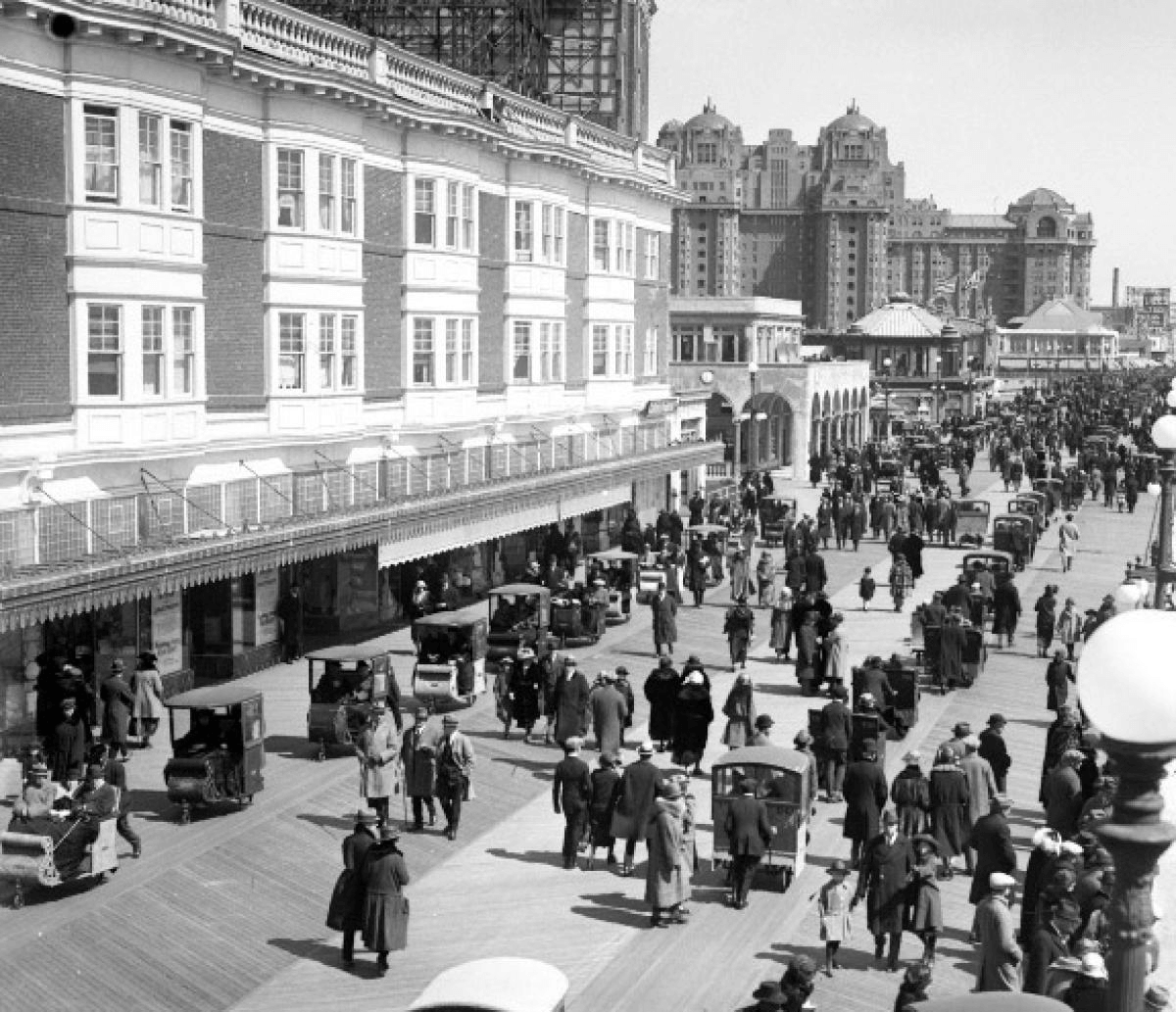 Atlantic City's venerable Miss America Pageant has close ties to Steel Pier. Frank Gravatt, one of the pier's early owners who hired George Hamid, saved the event from financial ruin by hosting the pageant in the pier's main ballroom, where Miss America was crowned in 1935-1938. The pageant later moved back to its home in Convention Hall, where the coronation had been in 1933.As air travel became accessible to more vacationers and Atlantic City slipped into its long, slow decline, the glory of Steel Pier eventually faded away until it closed in 1976. But, in nearly eight decades entertaining millions of people, it gained a well deserved place in the hearts of visitors worldwide. In 1982 it suffered a devastating fire, but was resurrected in 1993, by Donald Trump and is now an amusement pier. Many of Atlantic City's famed piers were destroyed in the Hurricane of 1944.The Boardwalk. Atlantic City's Boardwalk was yet another "world first," and perhaps its greatest claim to fame. Built in 1870 along a portion of the beach, it was designed to help hotel owners keep sand out of their lobbies. The idea caught on, and the boardwalk was expanded and modified several times in the following years. The historic length of the boardwalk, before the 1944 hurricane, was about 7 miles (11 km) and it extended from Atlantic City to Longport, through Ventnor and Margate. Today, it is 4.12 miles (6.63 km) long and 60 feet (18 m) wide, reinforced with steel and concrete. The combined length of the Atlantic City and Ventnor boardwalks -- the boardwalk now ends at the Ventnor/Margate border -- is approximately 5.75 miles (9.25 km), currently the world's longest boardwalk. 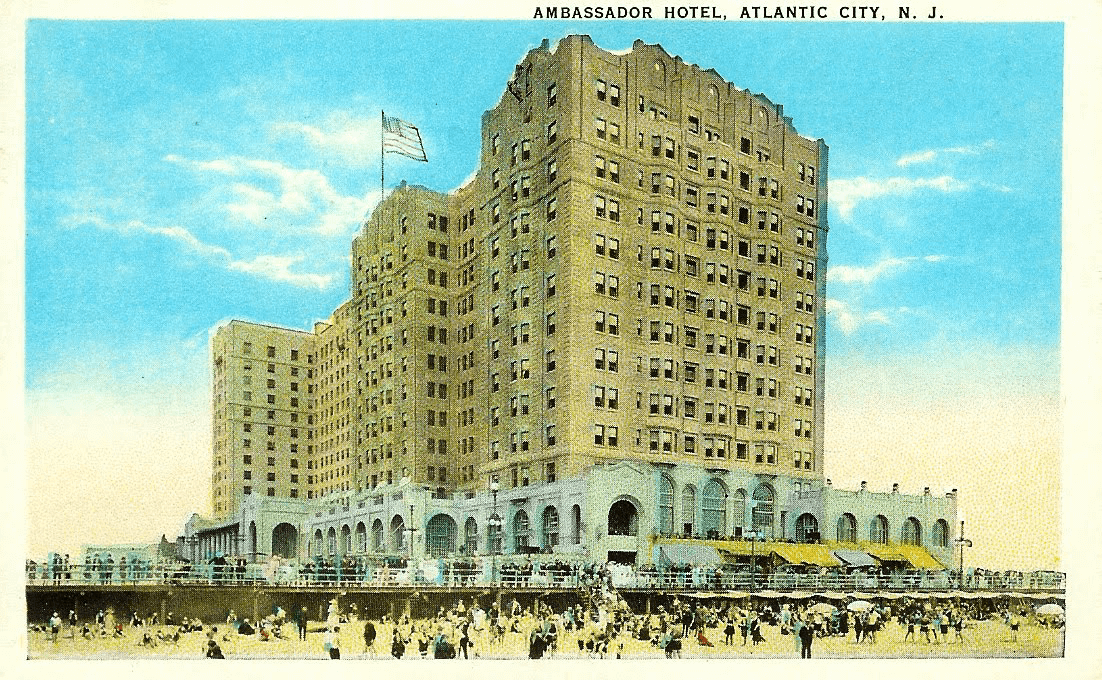 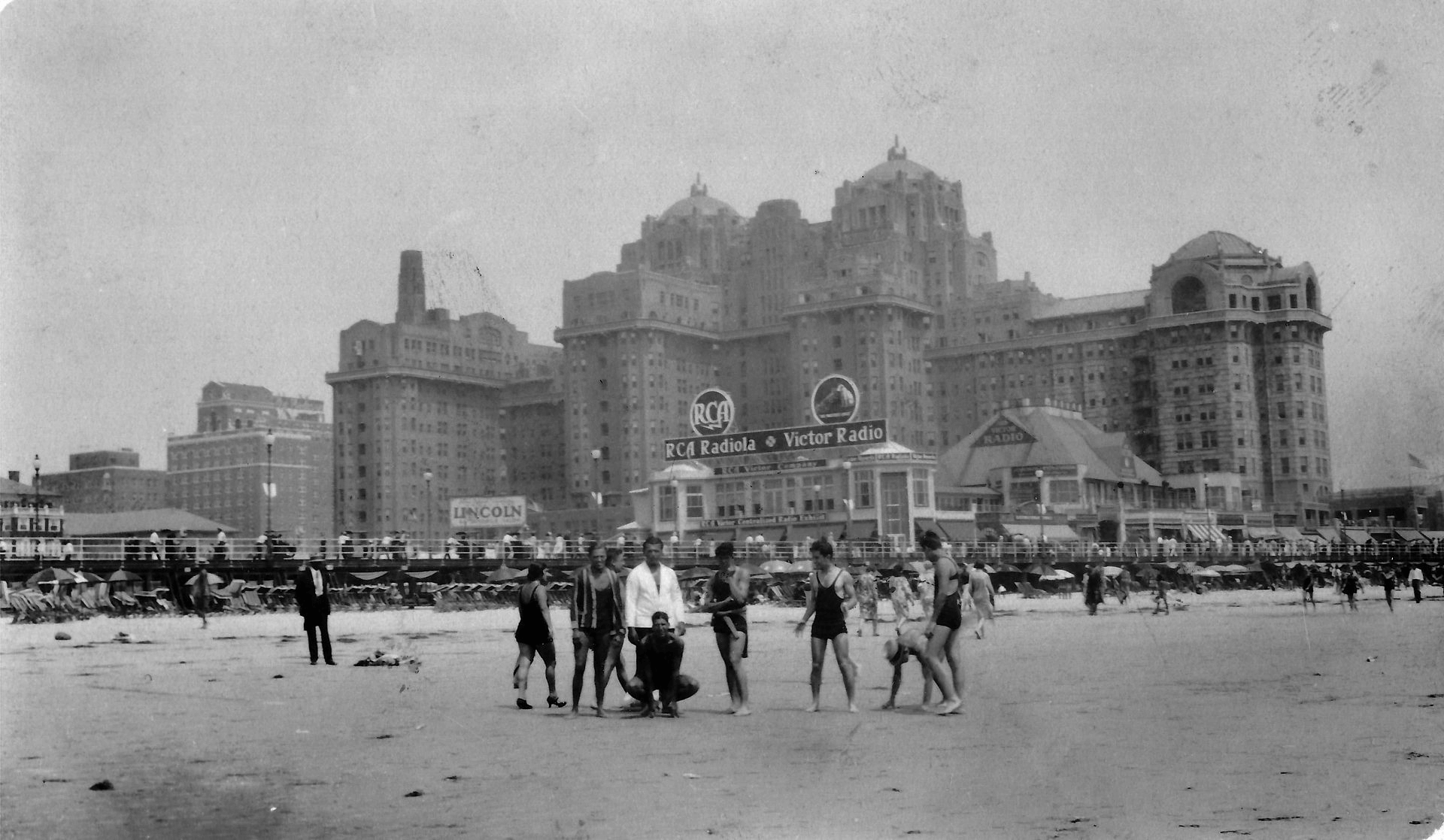 Many firsts. For many contestants, seeing an ocean was not just their only first. All the contestants stayed at the new luxurious hotel, the Ritz-Carlton. For many of them, it would have been their first stay in a hotel. At that time, if families traveled, it was usually to see relatives. There were not many hotels in small towns (even business travelers rented a room from a private home); most hotels were only found in resorts, like Atlantic City.During the early part of the 20th century, Atlantic City went through a radical building boom. Many of the modest boarding houses that dotted the boardwalk were replaced with large hotels. Two of the city's most distinctive hotels were the Marlborough-Blenheim Hotel and the Traymore Hotel. One by one, additional large hotels were constructed along the boardwalk, including the Brighton, Chelsea, Shelburne, Ambassador, Ritz Carlton, Mayflower, Madison House, and the Breakers.Hackney's - the world's largest seafood restaurant!Seafood. For probably most of the Mid-West contestants, this was also their first taste of lobster. At that time, Hackney's was the world's largest seafood restaurant. The main dining room could seat 3,200 patrons! That was as large as some small towns! On the third day of the Pageant, the girls lunched upon lobsters brought in by airplane from Gloucester, Massachusetts. And, 75 years later, Gloucester is still renowned for their lobsters!Movie theatre - Ghost Train. Conversely, movie theatres were ubiquitous -- in all major cities and many small towns as well; as of 1920 there were 20,000 movie houses in America. The commonality of movies is perhaps underscored by the fact that Miss Wisconsin remembered clearly dining on lobster at Hackney's but did not remember going to the movies, or seeing Ghost Train.