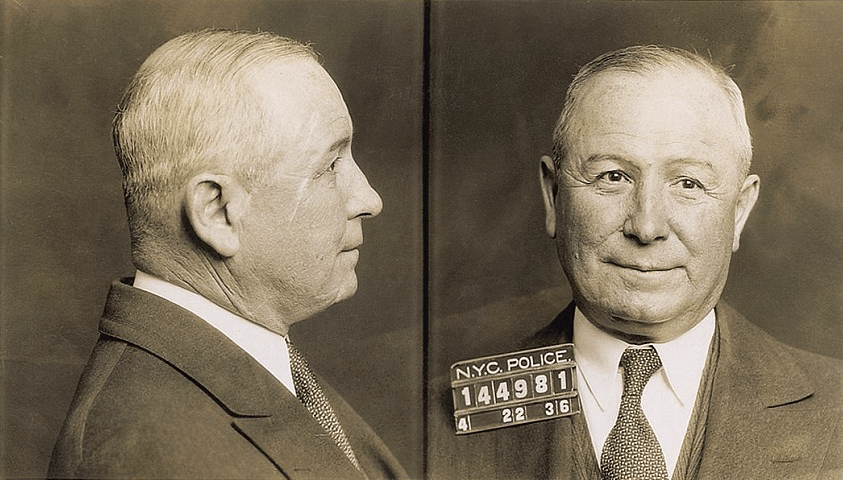 John "Papa Johnny" Torrio, born Giovanni Torrio (January 20, 1882 – April 16, 1957), also known as "The Fox" and as "The Immune", was an Italian-American mobster who helped build the criminal empire known as the Chicago Outfit in the 1920s that was later inherited by his protégé, Al Capone.[1][2] He also put forth the idea of the National Crime Syndicate in the 1930s and later became an unofficial adviser to the Genovese crime family.

Torrio's birthplace is a topic of debate. He was born in southern Italy and possible sites of his birth are Naples,[3] Amalfi (Campania),[4] Orsara di Puglia (Apulia)[5] and Irsina (Basilicata).[6] After his father died when he was two years old, Torrio emigrated to New York City with his widowed mother. She remarried thereafter.His first jobs were as a porter and bouncer in Manhattan. While a teenager, he joined a street gang and became their leader; he eventually managed to save enough money and opened a billiards parlor for the group, out of which grew illegal activities such as gambling and loan sharking. Torrio's business acumen caught the eye of Paolo Vaccarelli (a.k.a. Paul Kelly), the leader of the famous Five Points Gang. Jimmy "The Shiv" DeStefano, Danny "Big Wang" Glaister and Al Capone, who worked at Kelly's club, admired Torrio's quick mind and looked to him as their mentor. Torrio greatly admired Kelly, who knew much about organized crime culture; Kelly convinced the younger man to dress conservatively, stop swearing, and set up a front as a legitimate entrepreneur.Torrio's gang ran legitimate businesses, but its main concern was the numbers game, supplemented by incomes from bookmaking, loan sharking, hijacking, prostitution, and opium trafficking. Capone and DeStefano were members of the Juniors, and soon joined the Five Points Gang. Torrio eventually hired Capone and DeStefano to bartend at the Harvard Inn, a bar in the Coney Island section of Brooklyn owned by Torrio's business associate, Francesco Ioele (a.k.a. Frankie Yale).

Torrio was the nephew of Victoria Moresco, the wife and business partner of "Big Jim" Colosimo, who had become the owner of more than 100 brothels in Chicago. Colosimo invited Torrio to Chicago in order to deal with extortion demands from the Black Hand. Torrio eliminated the extortionists and stayed on to run Colosimo's operations and to organize the criminal muscle needed to deal with threats to them.In 1919, Frankie Yale contacted Torrio and requested that he take Capone to Chicago, as Capone had gotten in trouble by nearly beating to death a member of a rival operation, the Irish White Hand gang of the Brooklyn dockyards (Yale's great rivals in Brooklyn). They were hunting for a scar-faced man, so Yale sent Capone to Chicago to lie low for a year.[7] Capone however, never returned to New York, becoming a bouncer at one of Torrio's Chicago brothels and soon became manager of The Four Deuces, one of Torrio's operations.While in Chicago, Torrio met Jean Forrenzo. Medical records indicate that Torrio had a child with Jean during this period. George Torrio was born in Washington, Iowa and his medical records show his name as George Miller. It is unknown how much contact Torrio had with his only child.

In 1920 Prohibition went into effect, making all manufacture, purchase, or sale of alcoholic beverages illegal. Torrio immediately realized the immense profits bootlegging could bring and urged "Big Jim" Colosimo to enter the business. Colosimo, however, refused, fearing that expansion into other rackets would only draw more attention from the police and rival gangs. During this same period, Colosimo divorced Victoria, Torrio's aunt, and married Dale Winter, an actress and singer. Winter convinced Colosimo to settle down, dress more conservatively, and stay out of the news.At this point, Torrio realized that Colosimo was a serious impediment to the mob's potential fortunes. With the approval of Colosimo's allies, the Genna brothers and Aiello, Torrio invited Yale to come to Chicago and kill Colosimo. The murder took place on May 11, 1920, in the main foyer of Colosimo's Cafe. No one was ever prosecuted. Torrio took over the deceased Colosimo's vast criminal kingdom and started to venture into bootlegging.

As the 1920s progressed, Torrio and Capone presided over the expansion of the Chicago Outfit as it raked in millions from gambling, prostitution, and now bootlegging. The Outfit soon came to control the Loop (Chicago's downtown area), as well as much of the South Side. However, it was also intent on seizing the profitable Gold Coast territory, which drew the ire of the powerful North Side Gang led by Dean O'Banion.The Outfit and the North Side Gang began a fragile alliance, but tension between O'Banion and the Gennas (who were Outfit allies) over territorial rights mounted. The Gennas wanted to kill O'Banion, but Torrio, not wanting all-out gang warfare, resisted the move. Finally, tensions boiled over when O'Banion cheated Torrio out of $500,000 in a brewery acquisition deal and caused Torrio's arrest. Torrio ran out of patience and ordered O'Banion killed. On November 10, 1924, O'Banion was murdered in his North Side flower shop by Yale, John Scalise, and Albert Anselmi. O'Banion's murder sparked a bloody, brutal gangland war between the North Side Gang and the Outfit that eventually chased Torrio out of Chicago.

On Saturday, January 24, 1925, in retaliation for the O'Banion assassination, North Siders Hymie Weiss, Vincent Drucci, and Bugs Moran attacked Torrio as he was returning to his apartment at 7106 South Clyde Avenue from a shopping trip with Anna, his wife. A hail of gunfire from Weiss and Moran greeted Torrio's car, shattering its glass. Torrio was struck in the jaw, lungs, groin, legs, and abdomen. Moran attempted to deliver a coup de grâce into Torrio's skull, but had run out of ammunition. Drucci signaled that it was time to go, and the three North Siders left the scene. The severely wounded Torrio survived.

Torrio, having undergone emergency surgery, recovered slowly from the assassination attempt. Capone had men guarding Torrio around the clock to make sure his beloved mentor was safe. Throughout this entire ordeal, Torrio, observing the gangland principle of "omertà" (total silence), never mentioned the names of his assailants. After his release from the hospital, Torrio served a year in jail for Prohibition violations. Throughout his reign as boss of the Chicago mob, Torrio had witnessed the massive increase in violence within organized crime. The near-death experience frightened him badly, and combined with his prison sentence and the increasing difficulty in his work, it persuaded Torrio to retire while he was still alive.In late 1925 Torrio moved to Italy, where he no longer dealt directly in mob business, with his wife and mother. He gave total control of the Outfit to Capone, saying as he left "It's all yours, Al. Me? I'm quitting. It's Europe for me."

Torrio returned to the United States in 1928 as Benito Mussolini began putting pressure on the Mafia in Italy. He is credited with helping to organize a loose cartel of East Coast bootleggers, the Big Seven, in which a number of prominent gangsters, including Lucky Luciano, Longy Zwillman, Joe Adonis, Frank Costello, and Meyer Lansky played a part. Torrio also supported creation of a national body that would prevent the sort of all-out turf wars between gangs that had broken out in Chicago and New York. His idea was well received, and he was given great respect, as he was considered an "elder statesman" in the world of organized crime. Once Luciano implemented the concept, the National Crime Syndicate was born.Torrio engaged in a number of legitimate businesses, including a legal liquor distribution company and a bail bond operation co-owned by Dutch Schultz. Schultz' murder and the threat of an income tax prosecution for his role in the Big Seven, however, led him to plan to depart to Brazil. Before he could do so, however, he was arrested on charges of income tax evasion in 1936 as he went to pick up his passport. Torrio pled guilty to those charges in 1939 and served two years in prison.His years after his release from prison were quiet, spent in Brooklyn, St. Petersburg, Florida and Cincinnati. Torrio largely occupied himself in real estate investments and appears to have met his promise to his wife Anna to refrain from any activities that would return him to the sort of notoriety he had before his 1939 conviction.

In 1957, Torrio had a heart attack in Brooklyn while sitting in a barber's chair waiting for a haircut, dying several hours later in a nearby hospital.[2][8] The media did not learn about his death until three weeks after his burial.[9] In his memoirs, the U.S. Treasury official Elmer Irey considered him "the biggest gangster in America" and wrote as follows: "He was the smartest and, I dare say, the best of all the hoodlums. 'Best' referring to talent, not morals".[10] Virgil W. Peterson of the Chicago Crime Commission stated that his "talents as an organizational genius were widely respected by the major gang bosses in the New York City area".[11]