The Five Points Gang was a criminal organization that was based in the Lower East Side of Manhattan, New York City during the Tammany Hall era of history.

By the 1870s a wave of Italian and Eastern European Jewish immigrants were settling into the area. Criminal gangs competed for control of the revenue to be made from illicit activities. Ethnic Irish gangs, such as the Whyos, replaced the Chichesters, and fought against the newer, predominantly Jewish gangs, such as Monk Eastman's Eastman Coin Collectors. 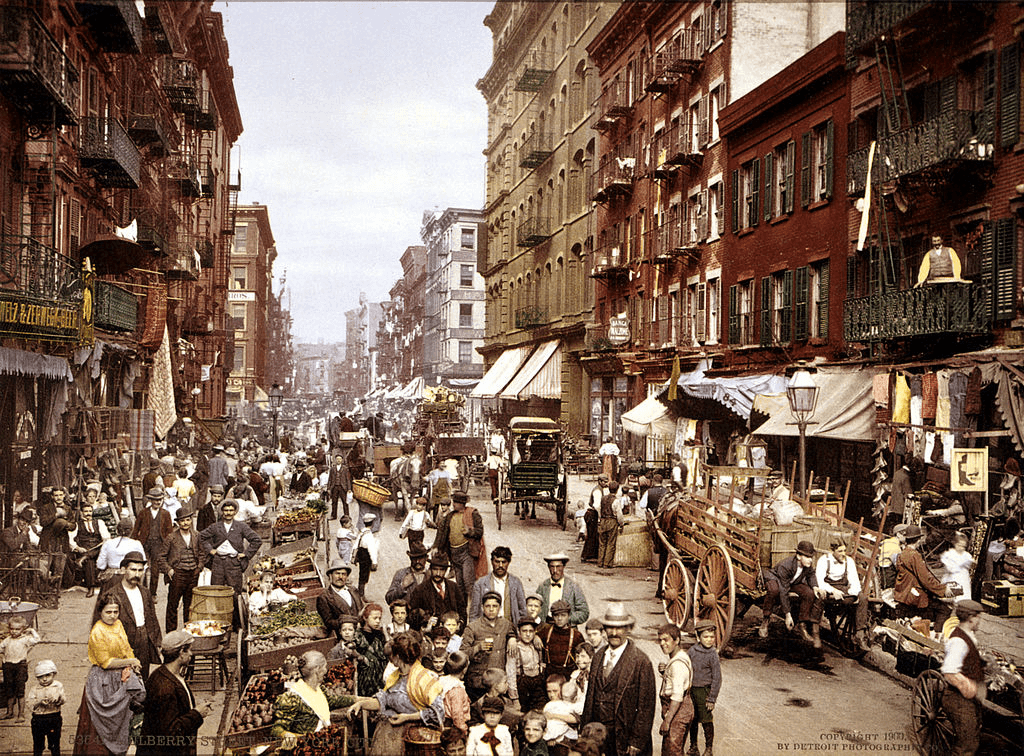 During the late 18th and early 19th century the Lower East Side of Manhattan had an area called the Five Points. It was is where the streets of Mulberry, Anthony (Worth), Cross (Park), Orange (Baxter), and Little Water (gone) merged. This area is now the location of Chinatown, between Broadway and the Bowery.

The area was first known for gangs of Irish immigrants in the early 19th century and was extremely poor, a common place for poor immigrants that were fresh off the boat. This era was ripe for crime and many youngsters often joined gangs for protection and a means to earn even a meager wage on the streets.

Gambling dens and brothels were numerous in the Five Points area, and it was considered a dangerous destination, where many people had been mugged, particularly at night. In 1842, Charles Dickens visited the area and was appalled at the poor living conditions in substandard housing.[1] In that decade, various church groups worked to end the vices in the district to help its many poor families who lived there. The Sixth Ward had a reputation as an area with a corrupt political process, more true particularly after the American Civil War. In one election, the total number of ballots filed was higher than the number of registered voters in the area.[citation needed]

An Italian immigrant named Paolo Antonio Vaccarelli, later named Paul Kelly founded the Five Points Gang and took over the territory. The Five Points Gang would go on to become the dominant street gang of the early 1900's into the 1920's when it was absorbed by Charles Luciano and the mafia.

The Italian immigrant and criminal Paolo Antonio Vaccarelli, also known as Paul Kelly, formed the Italian Five Points Gang. It became one of the most significant street gangs in United States history and changed the way criminal groups operated in America. During the gang's later years, Kelly's second-in-command was John Torrio, who helped form a national crime syndicate in the United States. The Five Points Gang had a reputation for brutality, and in battles with rival gangs, they often fought to the death. Kelly and Torrio recruited members from other gangs in New York to join the Five Points organization. Al Capone came from the James Street gang, and would later rise to be one of the most notorious criminals in the country. Torrio was the first to establish his style of racketeering in Chicago, and recruited Capone to join him there. Charles "Lucky" Luciano, also joined the Five Points crew, and was later considered the most powerful criminal in the country.[citation needed]

As the Five Points Gang became more experienced, Kelly and his lieutenants saw the money to be made by supporting corrupt politicians in their election bids. By threatening voters, falsifying voter lists and stuffing ballot boxes, the gang aided city officials of the Tammany Hall era to retain power. At the turn of the 20th century, the only competitors to the Five Pointers was from Monk Eastman's gang.The rivals disputed claims to a strip of territory of the Lower East Side in Manhattan. In 1901 a Five Pointer shot Eastman in the stomach, but he survived. Soon after, one of his crew killed a Five Pointer in retaliation. The feud escalated by 1903, and the two gangs openly engaged in warfare. In one incident Kelly, Torrio and 50 Five Pointers were in a gun battle with a similarly sized force of Eastman's gang. Police called to the scene had to retreat from the battle, which lasted several hours. Three men were killed, and many were wounded in the battle. When the police finally gained control of the situation, they arrested Eastman, but he spent only a few hours in jail. A Tammany-controlled judge released him after Eastman swore that he was innocent.The general public was angered about warfare in the streets. A Tammany Hall deputy named Tom Foley brought Kelly and Eastman together and told them that neither would receive any political protection if they did not resolve the border dispute. They restored peace for a short time, but within two months, violence had risen again. Officials brought together the two leaders but asked them to take each other on in a boxing match, with the winner's gang to take the disputed territory.On the appointed day, hundreds of men from both sides met at an abandoned house in the Bronx. Eastman and Kelly fought each other for two hours. Kelly had been a boxer in his younger days, and was said to make a better showing in the earlier rounds, but Eastman was a larger man and fought ferociously. At the end of the match, neither man had been knocked out, and the match was declared a draw. The gang leaders told their men that they were still at war. At this point, the Tammany Hall bosses decided to back the Five Points crew, and to withdraw any legal or political help to Eastman and his gang. In 1904 Eastman was beaten unconscious by a policeman who had foiled a robbery in progress. Eastman was convicted of the crime and sentenced to a 10-year term in Sing Sing. His successor Max "Kid Twist" Zwerbach was murdered in 1908 by members of the Five Points Gang, and the Eastman crew began to crumble.

Paolo Vaccarelli/Paul Kelly survived an attempt on his life, after being shot three times by two of his lieutenants, James T. "Biff" Ellison and Pat "Razor" Riley, in a gun battle inside one of his nightclubs. Tammany Hall pressure made him keep a lower profile after this incident. He became more involved in the nascent labor union rackets. He died of natural causes in 1936.After Monk Eastman was released in 1909, he never regained leadership of his former criminal organization. He fell into a life of petty crime and repeated jail terms. Within a few years, Eastman joined the army as a 44-year-old man to fight in World War I, and had a distinguished military record fighting in combat as fearlessly as he had on the streets of New York. After his honorable discharge in 1919, a year later he was shot five times and killed by a prohibition agent named Jerry Bohan. He was given a funeral with full military honors.[citation needed]

Gradually the Mafia gangs took over the rackets and criminal activities formerly controlled by the Five Points Gang. Former Five Pointers such as Torrio, Capone and Luciano became the leaders of the new groups, and expanded their operations on a national and international basis. With the 18th Amendment and the Volstead Act establishing Prohibition in 1920, profits from bootlegged liquor became a huge source of revenue for the Mafia families.