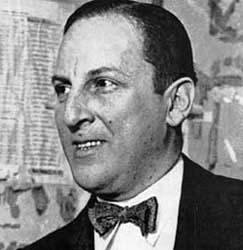 Arnold Rothstein, had many nicknames. Known as A.R., Mr. Big, The Fixer, The Man Uptown, The Big Bankroll and The Brain, Rothstein was responsible for many infamous dealings and is partially responsible for how the mafia is today. In addition to the alleged fixing of the 1919 World Series, Rothstein owned a bootlegging organization as well as several gambling rackets in the city.

While Arnold died a few years before La Cosa Nostra was organized, during his life he was responsible for transforming the vice industries of gambling and narcotics dealing. Rothstein was famous for his own exploits, however his greatest legacy was mentoring a young Charles Luciano and his partner Meyer Lansky. Rothstein gave Luciano the tools to take over La Cosa Nostra and assert his own power that would come to fruition years after Rothstein's death.

Lansky and Luciano would come to use the vision that Rothstein had provided to organize the global narcotics trade in the aftermath of Prohibition and turn local criminal gangs into a full fledged National Crime Syndicate across the entire nation.

Arnold Rothstein was born in New York City in on January 17th, 1882 to a wealthy Jewish immigrant named Abraham Rothstein and his wife Esther. Abraham was a racketeer and business man, where Rothstein most likely began to learn his ways from.

Rothstein's major vice would begin to influence his life early in his childhood. As a child he began to gamble, often shooting dice against his fathers wishes. In 1921 Rothstein was asked where he became a gambler, and he said:

"I always gambled. I can't remember when I didn't. Maybe I gambled just to show my father he couldn't tell me what to do, but I don't think so. I think I gambled because I loved the excitement. When I gambled, nothing else mattered."

Rothstein was very well read and educated and skilled in mathematics. As a kid he was to take over his father's business however soon he dropped out of school to consider much more profitable criminal enterprises. His brother went on to be a rabbi. Arnold quickly joined the underworld through his fathers contacts and began to establish himself.

In 1919 it was rumored that Rothstein and his associates had fixed the 1919 World Series, an event that would go down in both sports and mafia history. According to some, Rothstein and his organization paid the members of the Chicago White Sox to lose the game on purpose so that he could place a bet against them and win big. 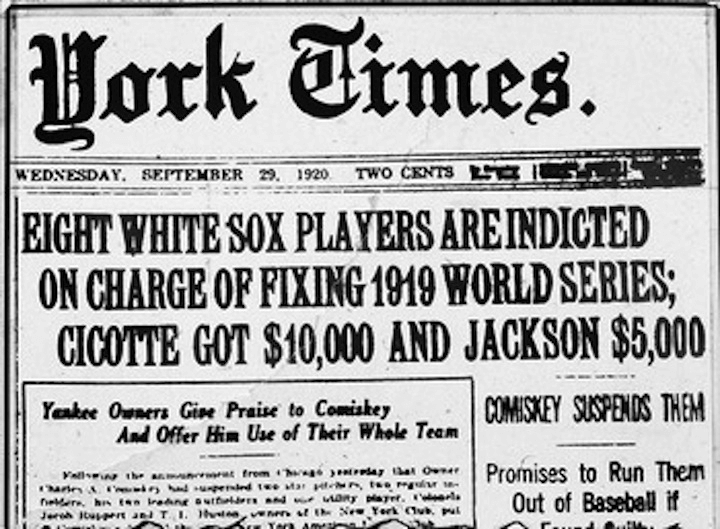 This event became known as the Black Sox Scandal and was featured in newspapers across America. Rothstein was brought to testify before a grand jury in Chicago where he claimed he was an innocent businessman that was caught up in this and needed to clear his name. The prosecutors had no physical evidence linking Rothstein to the scandal and he was never prosecuted. Rothstein testified:

"The whole thing started when (Abe) Attell and some other cheap gamblers decided to frame the Series and make a killing. The world knows I was asked in on the deal and my friends know how I turned it down flat. I don't doubt that Attell used my name to put it over. That's been done by smarter men than Abe. But I was not in on it, would not have gone into it under any circumstances and did not bet a cent on the Series after I found out what was under way" 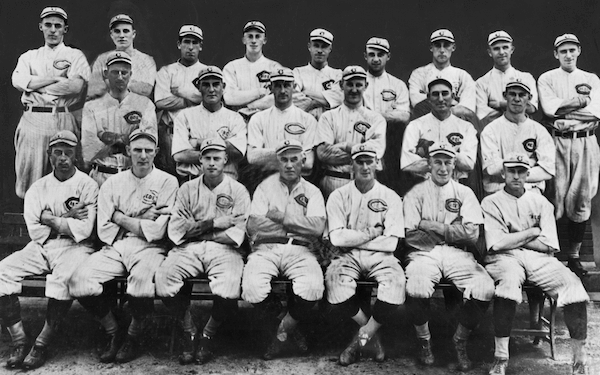 In another version of the story, Rothstein was first approached by Joseph "Sport" Sullivan, a gambler, who suggested Rothstein help fix the World Series. Rothstein supposedly turned down Sullivan's proposal but when he received Attell's offer, Rothstein reconsidered Sullivan's first offer. He figured that the competition to fix the game made it worth the risk to get involved and still be able to cover his involvement. David Pietrusza's biography of Rothstein suggested that the gangster worked both ends of the fix with Sullivan and Attell.[12] Michael Alexander concluded that Attell fixed the Series "probably without Arnold Rothstein's approval", which "did not prevent Rothstein from betting on the Series with inside knowledge."[13]The odd thing – or perhaps not – about the legal battle surrounding the World Series fix, Leo Katcher says, is that "all the records and minutes of the Grand Jury disappeared. So, too, did the signed confessions of Cicotte, Williams and Jackson… The state, virtually all of its evidence gone, sought to get the players to repeat their confession on the stand. This they refused to do, citing the Fifth Amendment."Eventually, the judge had no choice but to dismiss the case. Katcher states, "Thus, on the official record and on the basis of [State Attorney Maclay] Hoyne's statement, Rothstein was never involved in the fixing of the Series. Also, on the official record, it was never proved that the Series had been fixed."All eight White Sox players were forever banned from the game of baseball. Despite all his denials, though, Katcher notes that "while Rothstein won the Series, he won a small sum. He always maintained it was less than $100,000. It actually was about $350,000. It could have been much – very much – more. It wasn't because Rothstein chicken [sic] out. A World Series fix was too good to be true – even if it was true."[9]

By 1920 Rothstein at the age of 28 moved into Manhattan. It was here he built a casino and also invested in a horse racing track in Havre de Grace, Maryland. Some figure this was so he could fix many of the races that he "won".

Rothstein often used many of his fathers contacts in the banking community, along with his own network of informants in his criminal enterprises. He always paid premium for good information and this increased his power exponentially. By age 30 he was a millionaire in New York during the Roaring Twenties.

In 1916 the federal government attempted to regulate the use of drugs such as cocaine, heroin, morphine and other dangerous narcotics that were originally sold over the counter. Under the new Harrison Narcotics Tax Act, the government began cracking down on drugs and creating a prohibition of a different kind. By 1921 after these drugs had been off the market for many years, a massive underground black market had been built to supply the massive demand of people that used to buy these drugs over the counter.

It was known that Rothstein rode around New York in a Rolls Royce Silver Ghost, an extremely noticeable status icon.

Under the pseudonym "Redstone Stable," Rothstein owned a racehorse named Sporting Blood, which won the 1921 Travers Stakes under suspicious circumstances. Rothstein allegedly conspired with a leading trainer, Sam Hildreth, to drive up the odds on Sporting Blood. Hildreth entered an outstanding three-year- old, Grey Lag, on the morning of the race, causing the odds on Sporting Blood, to rise to 3-1. Rothstein bet $150,000 through bookmakers, allegedly having been informed that the second favorite, Prudery, was off her feed. Just before post time and without explanation, Hildreth scratched Grey Lag from the starting list. Rothstein collected over $500,000 in bets plus the purse, but a conspiracy was never proven.[14]

Arnold Rothstein was a big supporter of Prohibition. He saw it as an opportunity for business and he expanded his operation of gambling into bootlegging and drugs. He ran an extensive network of smugglers and bootleggers that brought liquor into upstate New York from Canada along the Hudson River and the Great Lakes.

Rothstein also bought a large number of speakeasies in New York City. It was during this time that Rothstein was extremely influential in starting the criminal careers of future mob leader Charles Luciano and his advisor Meyer Lansky. He schooled Luciano and Lansky in the ways of treating crime like a business, and this influence would plant the future seeds for his takeover of La Cosa Nostra in the aftermath of the Castellammarese War. 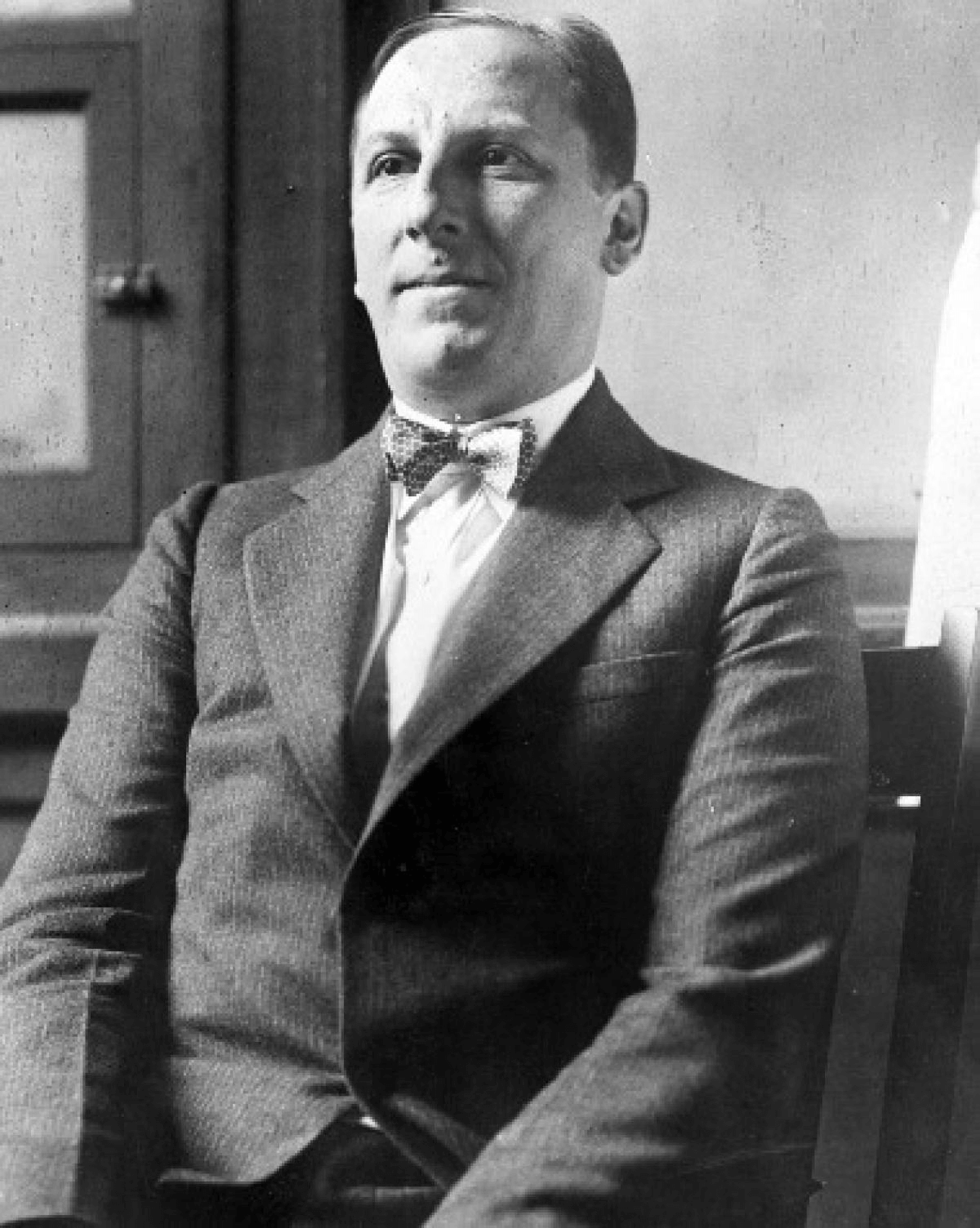 Rothstein's favorite hangout was a restaurant called Lindy's at Boardwalk and 49th Street in Manhattan. He charged a massive fee for his services and was often surrounded by bodyguards as he did business openly on the street.

“If a man is dumb, someone is going to get the best of him, so why not you? If you don’t, you’re as dumb as he is”

Rothstein's untimely death resulted from his lifelong vice of gambling. In October of 1928, at the height of his empire, Rothstein participated in a 3 day long high stakes poker game in which he lost over $320,000. Rothstein claimed the game was fixed (go figure) and refused to pay the debt right away. He hoped that making the players wait they would accept a lesser amount. 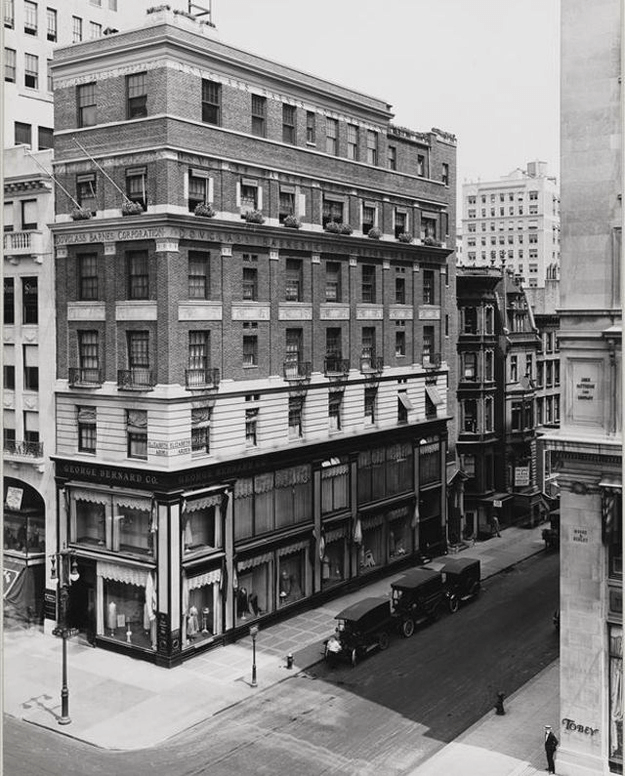 Laying on his deathbed, Rothstein refused to acknowledge his killer, telling the police:

"You stick to your trade. I'll stick to mine."

The hit was intended to punish Rothstein for failing to pay his debt.[16] The gambler George "Hump" McManus was arrested for the murder, but later acquitted for lack of evidence.[16]According to Kevin Cook in the book Titanic Thompson (2010), the poker game was fixed by gambler Titanic Thompson (real name Alvin Clarence Thomas) and his associate, Nate Raymond. Due to some complicated side bets, by the end Rothstein owed $319,000 to Raymond (much of which Raymond was due, by secret agreement, to pass on to Thompson); $30,000 to Thompson; and approximately $200,000 to the other gamblers present. McManus owed Rothstein $51,000.Rothstein stalled for time, saying that he would not be able to pay until after the elections of November 1928, when he expected to win $550,000 for successfully backing Hoover for President and Roosevelt for Governor. Thompson testified at McManus's trial, describing him as "a swell loser" who would never have shot Rothstein.[17] According to Cook, Thompson later told some of his acquaintances that the killer had not been McManus, but his "bag-man", Hyman Biller, who fled to Cuba shortly afterwards.[17]In his Kill the Dutchman! (1971), a biography of Dutch Schultz, the crime reporter Paul Sann suggests that Schultz murdered Rothstein. He says this was in retaliation for the murder of Schultz's friend and associate, Joey Noel, by Rothstein's protégé, Jack "Legs" Diamond.and "Me mudder (my mother) did it.".[19] Rothstein was buried at Ridgewood's Union Field Cemetery in an Orthodox Jewish ceremony.At his death, Prohibition was in full swing, various street gangs were battling for control of the liquor distribution, and the carefully constructed political boss structure of the late 19th century was in total collapse. Frank Erickson, Meyer Lansky, Bugsy Siegel, and other former associates split up Rothstein's various "enterprises" after his death. With Rothstein's death, the corrupt and already weakened Tammany Hall was critically weakened, because it relied on Rothstein to control the street gangs.[20] With Tammany Hall's fall, reformer Fiorello La Guardia rose in prominence and was elected Mayor of New York City in 1933.Ten years after his death, Arnold Rothstein's brother declared Rothstein's estate bankrupt and Arnold's wealth disappeared.[2]